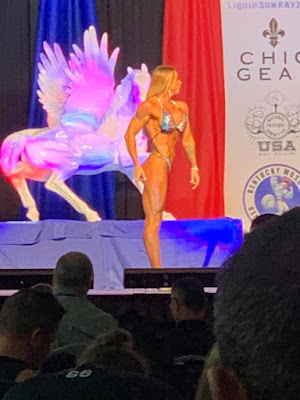 Contest prep guru, Tyler Bedson, hit the nail on the head when he spoke about Sarah Barnett's will to win. "Her consistency and desire to win shows, grows more and more, with each passing day." Bedson has coached Barnett to another Overall Win in Women's Physique, this time at the NPC Kentucky Derby Festival Championships. Before that, Bedson coached Barnett to a big victory at the Europa Orlando, some 800 miles away, in Florida. The Bedson/Barnett collaboration is unstoppable, as eyes on the national scene are now fixated on the Next Level Sports Nutrition athlete. Her road to pro is clear-cut and undeniable. Now it's time to push her on all fronts, with an aggressive marketing campaign, the likes of which the 502 Wrecking Crew is famous for.

That being said, a big part of the credit is owed to IFBB Pro Bodybuilder Kevin Johnson, who created Sarah's very moving posing routine. The song selection was perfect and Sarah presented a routine hugely artistic and perfectly executed - it told a story better than words ever could. Kevin is an absolute genius, but beyond that, he's a true artist. I watched the 40 second clip, no less than 15x straight, over and over and over again; it was really emotional. I honestly loved it and simply can't say enough about it.

Kevin Johnson is the greatest poser and posing coach in Kentucky.


Other folks who brought fantastic physiques, and who we will be looking to do interviews with at The Factory and Lift Inc, included  Tiffany Davis (a novice competitor that cleaned house!!), Rachel Jensen (who won Class F, Open Bikini), Total INSANITY between The Shredder - Chauncey Wilson and Cody Nolen, and a big win by MPD Competitor Tracy Cates, and others!

Unfortunately, and as suspected, there was zero media coverage at this event. We won't dwell on this embarrassing note, but will say that good customer service, demands that one of Kentucky's largest contests, invest in having press for the competitors.
at April 28, 2019