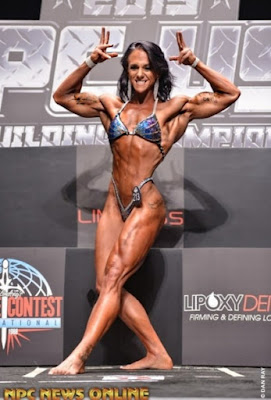 First and foremost, I'd like to say how proud I am of my friend, NPC Women's Physique Competitor, Jodie Engle. Jodie just got back from a stellar outing at the 2019 NPC USA Championships in Las Vegas, NV, where she earned an impressive Top 5 placing. Most bodybuilding fans understand the hierarchy of NPC contests and would be quick to congratulate Jodie, with new coach James Brown in her corner. For newer fans of the sport, it's important to understand that getting Top 3 at a junior level national show (e.g. Junior USA's, Junior Nationals), then getting a Top 5 at a (full-fledged) national-level pro qualifier (e.g. USA's, Nationals, Universe, and North Americans) is a significant step up (most certainly not, down). An easy way to distinguish the level between junior and (full-fledged) national-level pro qualifiers, is as simple as seeing which contests give pro cards to bodybuilders. Bodybuilders don't get pro cards at Junior Nationals or Junior USA's - even the bodybuilder who wins it all, doesn't get one.

I spoke to Jodie in the days before heading out, briefly while she was at the contest, and late last night. I wanted to make sure this piece got as much of her story in it, as possible. To say she was happy with the experience would be the understatement of the century. "This was by far the most fun I have ever had at any show I have ever done - from start to finish, everything went smoothly, thanks to my coach James Brown. He told me to simply get on the plane and get to Vegas and let him handle everything else. He did exactly that. I literally did not even have to think; he handled everything for me, so huge thank you to my coach!"

That being said, to simply sum up this contest as smiles and trophies, would hardly be accurate. Jodie embarked on a journey full of hurdles, but what ever obstacle life put in her way, she saw to overcoming it. This woman is a trooper! If you ever count her out, be afraid - be very afraid. If you think all Jodie will ever be is a local champion, you've probably been wiping the egg of your face for quite some time, especially as her star continues to rise.

"Not too many people realize everything I endured during this prep - from a major break-up, job changes, 16 hour workdays (6 days a week) and finally quitting a job to solely focus on prep. To say this journey showed me I am a lot more capable than I ever imagined, would hit the nail on the head." - Jodie Engle


2019 has been a very good year for Kentucky's top, amateur, Women's Physique competitor. Countless women look up to her, want to follow in her footsteps, and countless more across the country (and eventually around the world) will be inspired by this hardworking career professional, mom, and soon to be pro athlete. The next step from here, will be an 8 month improvement season, followed by taking the stage at the 2020 NPC Junior Nationals!

"To everyone who has watched and supported me these past 32 weeks all I can say is, thank you, your support means more than you could ever realize.

I'm far from done, everyone! The fire lit under me is burning hotter than ever and PLEASE quote me on this.. with James Brown in my corner, I WILL get my pro card in Chicago next year." - Jodie Engle