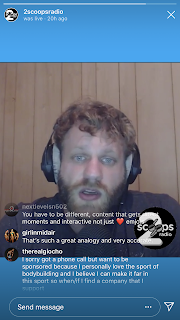 First and foremost, I'd like to say how proud I am of Cory Howell for pressing forward with 2 Scoops Radio. It's very difficult breaking from one's comfort zone, breaking with a routine, and moving forward onto new formats and frontiers. For well over a year, Cory and Ty worked very hard to create something very special on the airwaves. Week after week, they put in a great deal of time, energy, and resources into giving thousands of podcast listeners something to look forward to with each, new episode. After a two month hiatus, Cory moved forward, now with his second episode of the new program in the can.

When we met up, we'd discussed the idea of him flying solo (at least for a while), and how successful it would be. I think the LIVE component also provides plenty of great questions, in addition to those submitted pre-recording. In time, however, I'm sure the traditional podcast format will be offered, as well.

I'd say the hardest part is now behind him. That first episode was probably the toughest, because it broke the hiatus, it ended the silence. With a studio in the works and a good 5-6 months left in the season,
2 Scoops Radio will have plenty to talk about and a who's who of guests to pick from. Anyone who's asked to be a part of this awesome program, would jump at the opportunity. I'm also eager to see
2 Scoops Radio become a major force in Kentucky contest coverage, so I'm hoping our promoters DM/email Cory in the near future.

With regards to sponsors, I truly think companies should look at this program as a great way to get the word out about their goods and services to both the local and national fitness community. From supplement stores, to meal prep companies, to sports massage, suit designers, and baked goods!! Advertising is key and if you don't have money to advertise, then impose a pay cut on yourself, and do right by your business. Businesses no one's ever heard of, are bound to go belly up.

2 Scoops Radio never had sponsors, they never got press passes, and they never got paid for their work. Could you imagine working your tail off for over 50 programs and not getting anything back for it? Could you imagine, on top of that, having to spend your money to host podcasts, buy equipment, and travel to contests (even pay for parking!)? I'd say that would take a toll on anyone.

The truth of the matter is, 2SR brings undeniable value to Kentucky's fitness community, creates interest in NPC contests, and could do even more great work, provided they have the right backers. This is all the more reason, that I think the second half of 2019, will be very fruitful for the show, and why I believe Cory will write a new chapter in its history.